A spectacular exhibition, ‘Travelling in the Middle Ages’, mounted in collaboration with museums in Florence, Catalonia and Cologne, is running in Musée de Cluny in Paris from 22 October 2014 to 23 February 2015 (http://www.musee-moyenage.fr/activites/expositions/expositions-en-cours-/exposition-voyager-au-moyen-age.html). The exhibition illustrates many aspects of travel in the Middle Ages, and different motivations for travel, such as pilgrimage, war, exploration and social aspirations. The choice of exhibits is highly imaginative and includes manuscripts, maps, fragments of a medieval boat, personal objects, such as clothing, trunks, amulets and portable candle holders, as well as tapestries, paintings and sculpture depicting travel. Among the objects on display are a signet ring of the Black Prince and a Viking Age memorial stone with an inscription in runes. Undoubtedly the most important exhibit from the point of view of an Anglo-Saxonist is the Codex Amiatinus (click on image below), an enormous Vulgate pandect made at Monkwearmouth-Jarrow under the direction of Abbot Ceofrith, now in the Biblioteca Medicea Laurenziana in Florence. This Bible known for exceptional quality of its text and execution is 250mm thick and weighs over 34kg. 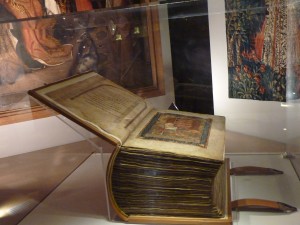